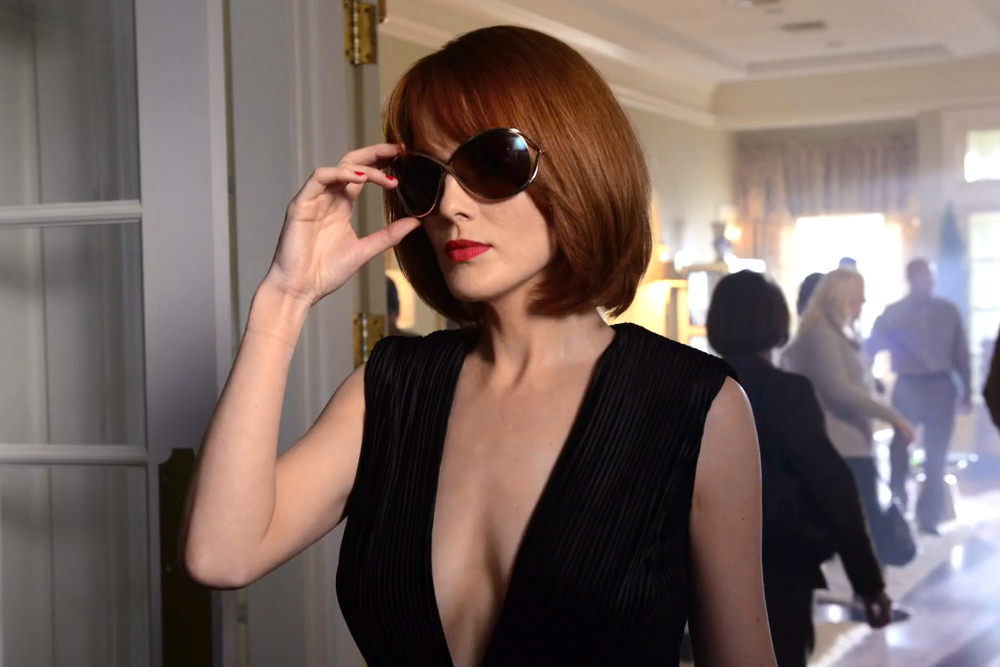 As huge Good Behavior fans, we’d like to pay an interactive tribute to the new TNT television show. To those of us who are still re-playing each episode, and noticing “all the things” you might have missed before, we thought we’d come up with a few ideas for how you can enjoy your favorite parts of Good Behavior during the off season.

If you haven’t tuned into Good Behavior yet, we don’t want to completely spoil it for you. So to future fans we say, please tune in while the episodes are still available at TNT online. We’ll start you off with the ultra-compelling trailer. Meet the characters who will unexpectedly have you wrapped around their fingers:

Good Behavior is based on a series of three short stories written by author Blake Crouch, whose previous book, Wayward Pines was also brought to television by Executive Producer Chad Hodge. The three original stories are now available as a book entitled Good Behavior, formerly known as Confidence Girl, and makes for great reading either before, during or after watching the television series. It’s fun to read the original incarnation, and recognize several of the lines that made it to the script. The book and the screenplay cut wildly different paths through Letty’s bizarre adventures, which is what makes them both so intriguing. It’s a blast to envision such different outcomes for Christian and Javier in particular. Or has the screenplay simply not caught up to the book yet? What does your heart tell you? This is a must read!

If there is one thing we can legally steal, it’s Letty Raines’ chic styling. The vibrant lips, wide range of outfits, and wigs are all looks that take the wardrobe, hair and makeup team hours to pull off. But here are a few off-the-rack fashions that we think Letty would approve.

Macy’s has some great black jumpsuits

And fabulous flowing mini dresses with a split sleeve 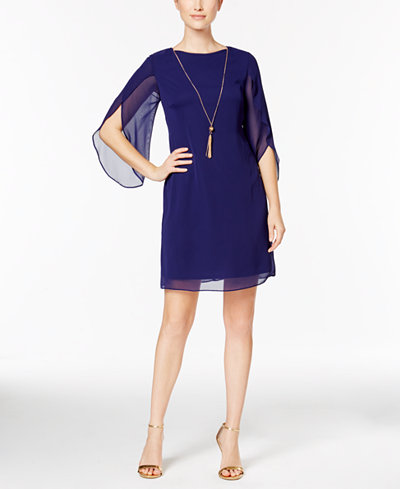 Dillard’s has this great number

Score! Look what we found on StyleWe. Now you too can dress up as one of Letty’s alter egos! 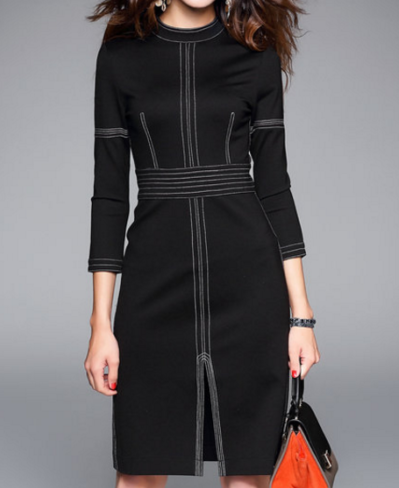 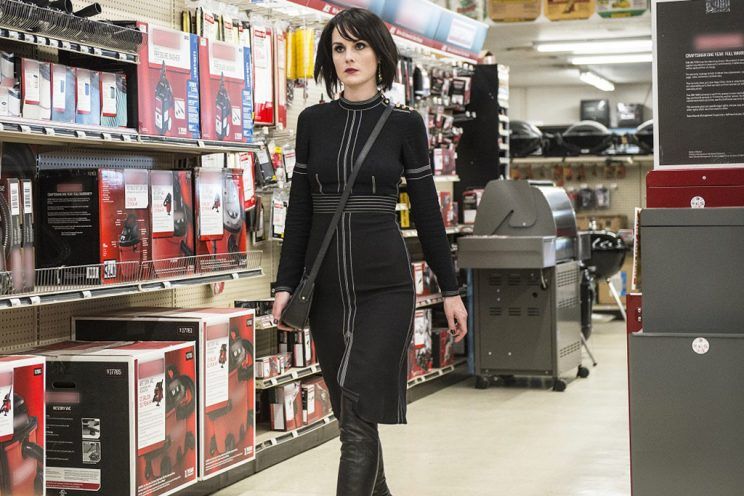 Little known fact: Michelle Dockery got her driver’s license in 2016 specifically so she could drive on Good Behavior. She never really needed one before. 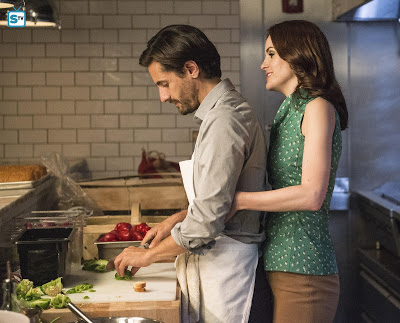 Newer fans will enjoy finding out everything they can about actor Juan Diego Botto. We’ll bottom line a few things for you. He was born in Argentina and resides in Spain, where his family moved after his father disappeared during the Dirty War when Juan was two. He has been in several Spanish movies and plays. Juan had to take a few cooking lessons prior to one Good Behavior episode, and in an interview for Parade revealed that he is a decent cook. His favorite dish to make is called pastel de papas, an Argentinian version of shepherd’s pie. Here is a version for you to try.

Little known fact: Juan Diego Botto dislocated his shoulder on the third day of filming Good Behavior. You’ll notice he tends not to move his right arm much in the early episodes.

Listen to the Soundtrack

So much thought goes into the soundtrack to Good Behavior we highly recommend you make it your own so you can enjoy it over cocktails, your own personal dance party, or your next road trip.

Speaking of road trips, for the most dedicated of fans, we recommend you take the soundtrack with you as you tour the Southeast locations of Good Behavior. Notable stops include Wilmington, North Carolina, where the series is filmed, Asheville, North Carolina, and Savannah, Georgia.

Wilmington, North Carolina is a great tourist destination with one of the best river walks in the US as well as one of the largest historical districts. It’s also minutes from several gorgeous beaches including Wrightsville, Caroline and Kure. If you head for Wrightsville Beach, you’ll find Orton Plantation which is the public garden that was used as The Inn at Truesdale Farm in episode two. 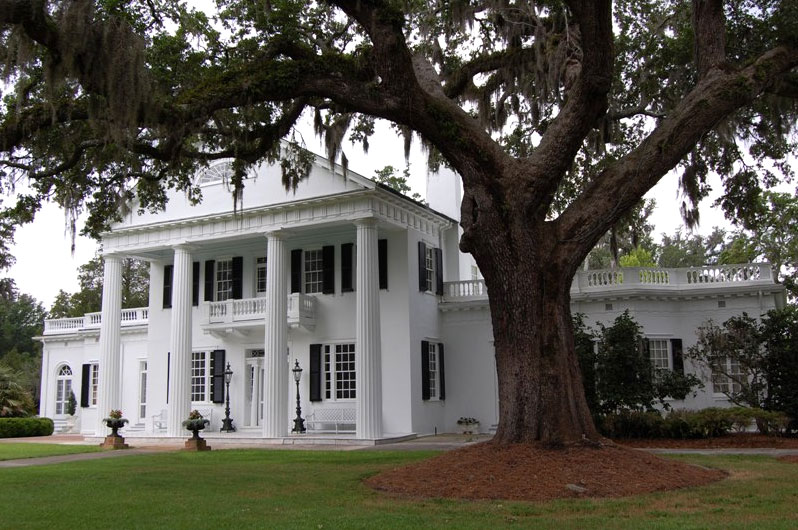 Asheville, North Carolina was just named the #1 Best Travel Destination in the US. Nestled in the Blue Ridge Mountains, the downtown food scene is as vibrant as Letty and Javier’s meeting spot would indicate.

It’s also the setting for America’s largest home, Biltmore, based on the great castles of Britain and France. (Shout out to Lady Mary! Love her!) 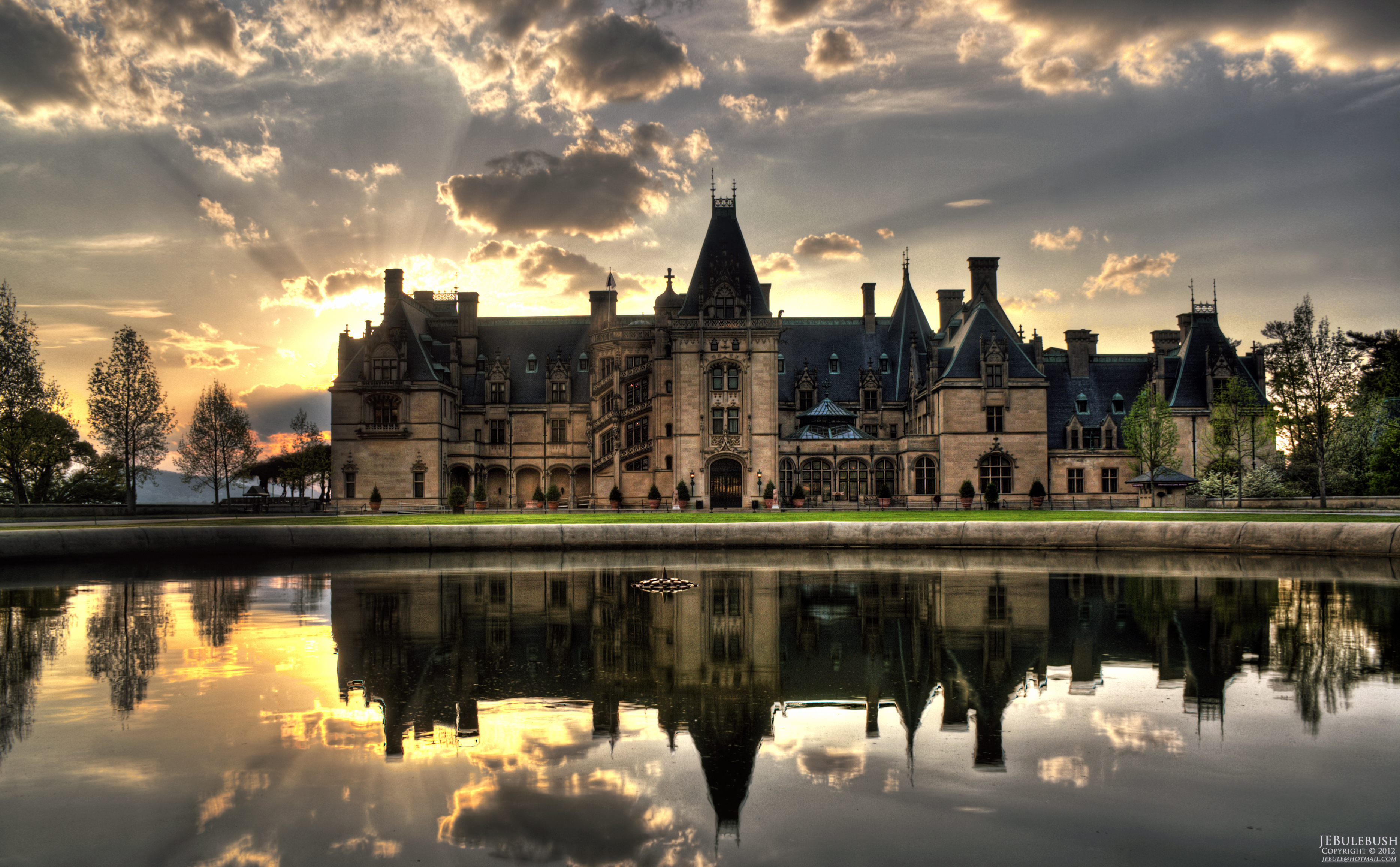 Finally, if some aspect of your life turns into a sh&@ show and you need a vacation, then make like Letty and Javier and head for Savannah. 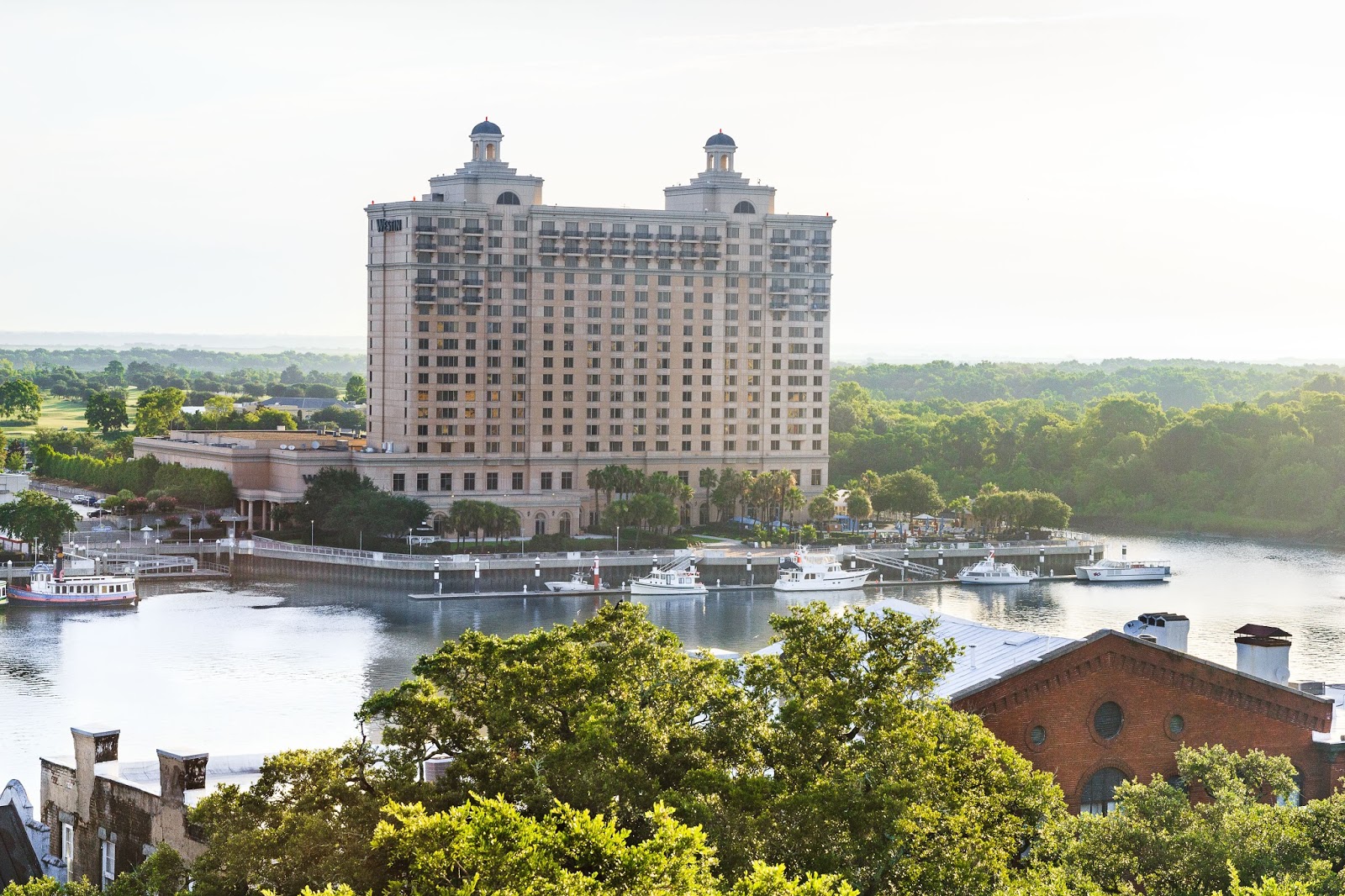 Photo: The Savannah Westin from Blog.Youreverydaytraveler.com

Chad Hodge, Good Behavior’s Executive Producer Extraordinaire, is one of the most accessible television big wigs! Keep up with his adventures on all of his social media accounts. We particularly like that he’s always acknowledging Good Behavior fans. He can frequently be found having fun meeting up with different cast members. You’re in good company with Chad Hodge, Blake Crouch. Michelle Dockery, Juan Diego Botto, Terry Kinney, Lusia Strus and the team of over one thousand people who bring us Good Behavior! Thank you! 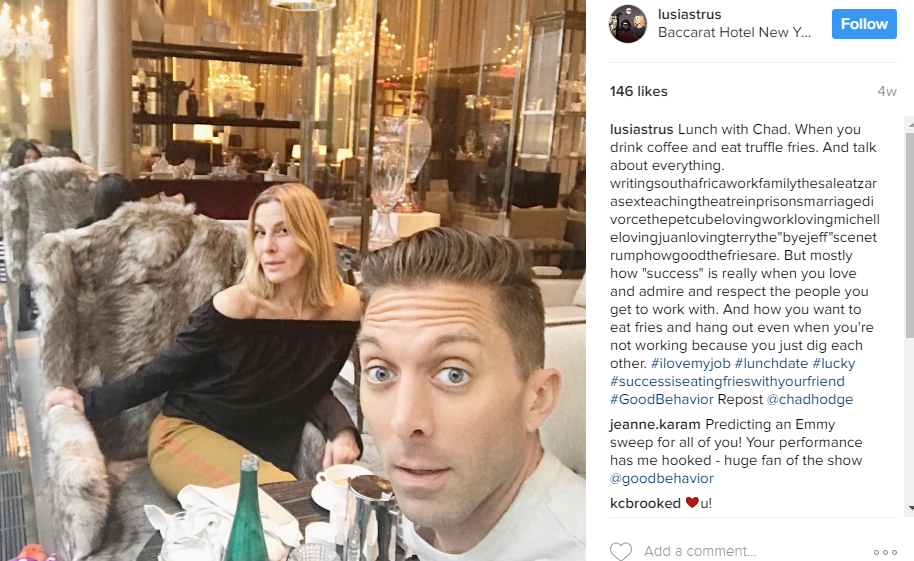 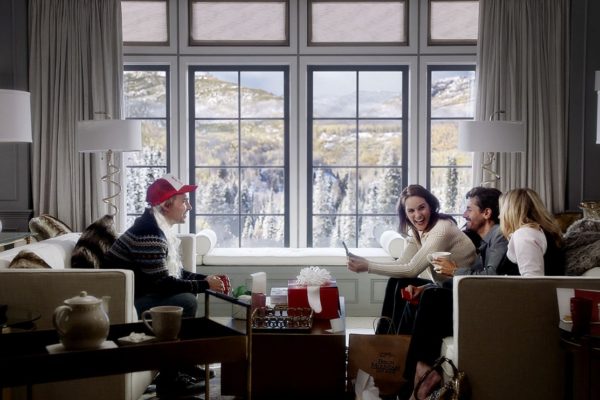